I’m going to bust on an Engineer for being an Engineer in a few posts from now, so I wanted to get some things straight. I was a double-degree my first 2 years in college, Chemistry and Chemical Engineering. When I decided that three years was all I could stand in the Great Midwest, I cut out with the Chemistry degree, having overloaded enough to obtain it in three years*. Because of the Chem E track, almost all my non-Math electives were in Engineering. I have great respect for the profession of Engineering. In fact, most of my graduate work was Molecular Engineering, rather than pure science. In my Shit Hit the Fan value system, Engineers rank well ahead of Scientists in the groups of people I’d want in the lifeboat if civilization pulled a Titanic. You can often grow good Scientists from Engineers. The reverse is much less successful.

Budding Engineers are more valued by society than budding Chemists, as demonstrated by the fact that Chemical Engineers make a lot more money straight out of undergrad than Chemists. With good reason. Chemistry is an experimental science (except for those weirdo theorists :D). The undergraduate experience does not adequately prepare a Chemist to practice the profession outside of the lower-order lab tech positions. A Master’s barely does.

Engineering is a different game from science after the undergraduate study period. While advanced Engineering, like Science, is still largely a medieval apprentice-based learning system, the Masters under whom the Engineer learns the trade (after learning the basics in school) are generally practicing Engineers, not Academics. Those Master practicing Engineers expect the newly-minted Engineer to actually produce something. Thus an Engineer starts out with a better real-world skill set than the B.Sc. Chemist. Hence the higher pay.

The Engineer pays something for that head start, though. The strength of a Scientist’s training is in thinking things through, reading the original sources, and knowing the philosophy and thought process behind most of what he or she does. That takes time, and an undergraduate course of study, with its emphasis on cramming technical details into heads, so that further study can take place, is inadequate to fully create that kind of skill. And an Engineer does not need a greatly sophisticated level of scientific detail to do his or her work, despite the fact that Engineering require sophisticated Math. The Engineer gets an awful lot of scientific rules of thumb thrown at them in school, many made up for a particular set of boundary conditions in which most work is conducted. Most Engineers are too busy making things to think deeply about the science behind those rules of thumb.

In the arrogant or careless, this creates problems when their minds venture beyond the boundary conditions where those rules of thumb hold true. And then you get an experience such as the one Rand Simberg describes in this post:

I (or someone, but I think it was me) suggested using gravity gradient stabilization (that is, taking advantage of the fact that a non-spherical satellite will naturally orient itself in the local vertical position, due to differential tidal forces between the line of the orbit and the small distances of the appendages from that line). The response of one of the supposedly experienced engineers was, "There's no gravity gradient at geosynchronous altitude."

I was a little surprised. "Oh, you mean there's not enough to do the job?" (I was thinking that perhaps he'd already considered it, and run the numbers.)

"No, there is no gravity gradient effect that high--it only applies in LEO."

Note that he wasn't making a quantitative argument, he was making a qualitative one. Low orbits had gravity gradient, high ones did not.

...What happened? Sometimes even engineers don't always apply good scientific principles. In this case, I suspect that he was an airplane guy who'd migrated into the space business (as often was the case in the beginning decades in the space industry), and had never really learned the fundamentals of orbital mechanics, or the underlying principles. Instead, he'd probably taken a space systems design course, and been given a lot of engineering rules of thumb, one of which was, no doubt, that gravity gradient can be used in LEO, but not in GEO.

And that's not a bad rule of thumb, as long as you understand where it comes from. Gravity gradient is indeed much less at twenty thousand miles altitude than at two hundred miles, and for most satellites could be considered, for practical purposes, to be non-existent. But we weren't talking about most satellites--we were looking at a new concept, much larger than anything previously deployed in GEO, with long booms and appendages that might, in fact be used for G-G stabilization. But because he didn't understand the physics, he mistook a rule of thumb for natural law, even though the law of gravitation says that the earth's gravity extends out to infinity, though it drops off as the square of the distance.

In other words, when one encounters an Engineer talking outside of his or her discipline, the caution I advised in this post goes double. Although this is a bit of an argumentum ad hominem, there is so much evidence in the Creationist literature that in this case the rule of thumb can be examined in detail. One can find in the arguments presented in that last link the original stupidity about the Second Law that I ripped apart in my own post on the subject – and find that the original errors were promulgated in the Creationist literature by an Engineer. A Chemical Engineer**! For shame!

The most error ridden thermodynamic analysis I have seen in print is the one by Creationist D. R. Boylan which appears on pages 133 to 138 in the Dec. 1978 issue of CRSQ.[37] [Note by Ben Dehner: Boylan was the Dean of Engineering of Patterson's department, at Iowa State University, at this time. Boylan was effectively Patterson's boss when Patterson accuses him -- in print -- of incompetence.] As we discuss this paper, I want the reader to keep the following statement by Boylan in mind, for it was published the previous year (1977) as if to assure us of his scientific expertise: [38]

"In teaching on-campus and at church, I have found that an understanding of physical laws, particularly the First and Second Laws of Thermodynamics, is essential to the defense of biblical truths. The Second Law has been particularly helpful in developing an apologetic against abiogenesis..."

To begin with, Boylan virtually equates two of the most distinguishable introductory level concepts in engineering thermodynamics, namely systems[39] and processes.[40] In effect he directs his reader to "consider life processes as systems." This is like a would-be mechanic directing us to consider gas combustion (a process) as being like a tire or an engine, which are mechanical systems.

After teaching beginners the profound difference between a process and a system, the next most important issues are (A) how to define or describe the system (e.g. close, open, isolated, etc.) to which one's analysis is to apply. (B) how to specify the system's boundaries, and (C) how to specify the nature of the processes taking place within or over these boundaries (e.g. are they reversible, irreversible, steady state, etc.) If these specifications are not done properly, the results of one's analysis can come out garbled or self-contradictory. Boylan's paper exemplifies such confusion because he fails to specify properly the system to which his analysis applies and the nature of the "life process" of which he speaks.

In an upcoming post, I’ll be examining one particularly egregious example of an Engineer taking some poorly-understood (by him) scientific principles and making a house of cards with them. And he’s not even a Creationist!


* I then promptly left for the USSR. Which was a vastly preferable place to be than Western Indiana. Terre Haute is the pimple on the ass of America.

** Chemical Engineers have to take more Thermodynamics than most other Engineering Disciplines.
Posted by John the Scientist at 7:27 PM 3 comments: 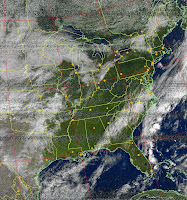 Haven't had any of this in a while. This is from NOAA17, which has been a consistently reliable performer. There are newer birds up now, NOAA18 and NOAA19, but they haven't seemed be as strong. NOAA 19, in particular, seldom produces good images. I'm wondering if I'm doing something wrong.

Anyway I'm ready for some nice clear fall weather!
Posted by CW at 8:36 AM 4 comments: