Country folk believe you can predict the severity of the winter by the bands of color on the wooly worm (Pyrrharctia isabella, the larva of the Isabella Tiger Moth). Wooly worms are brown and black, and may be found with alternating-colored stripes.

The wider or thicker the brown band (which is usually in the middle), the milder the winter is expected to be.

Last winter the wooly worms were solid black, predicting a cold, snowy winter - which is exactly what we got.

Based on the width and order of the caterpillar's black and brown stripes, Jack's forecast for the coming winter (starting with the winter solstice on December 21) says there will be cold and snow through the holidays and on into late January. There will be a bit of a warming trend in the last week of January and first week of February with a chance for ice. February will continue cold, becoming extremely cold in March. The weeks leading to the spring equinox on March 20 will see the winter close with lots of snow.

Checking the Farmer's Almanac, we find a similar prediction:

Old Man Winter doesn’t want to give up his frigid hold just yet, but his hold will mostly be in the middle of the country.

According to the 2010 Farmers’ Almanac, this winter will see more days of shivery conditions: a winter during which temperatures will average below normal for about three-quarters of the nation.

A large area of numbingly cold temperatures will predominate from roughly east of the Continental Divide to west of the Appalachians (see map). The coldest temperatures will be over the northern Great Lakes and the Upper Peninsula of Michigan. But acting almost like the bread of a sandwich, to this swath of unseasonable cold will be two regions with temperatures that will average closer to normal—the West Coast and the East Coast.

Another source says the wooly worms in West Virginia are all black. Perhaps the wooly worms are regionally precise? I have also heard that some all black ones were seen around here, as were some with a thick brown middle band, which indicates a warm spell in the middle of winter.

Comparing with scientific sources, the UAH global temperature anomaly shows a global average slightly cooler than last year for the last few days, but pretty close to the average for the last several years. This gets us back to the basic issue that local climate and global climate can be very different things, and we don't necessarily know exactly what that means. Last winter was one of the coldest in the modern record in the US, Europe, and China, but was warmer than average globally, because there were large areas in the higher latitudes (Northern Canada, South Pacific) that were significantly warmer than average.

So far it feels colder than usual around here and it isn't even winter yet. The forecast for tonight is 15 degrees F. Tomorrow it is supposed to be 13 deg. F. In many recent years past we have had shirtsleeves weather in December - but not in the last 3 or 4 years. Apparently it isn't just me: there have been a record number of new weather records this month, mainly for low temperatures and snowfall: check out this chart.

So what can we expect for the rest of the winter? (Actually, "the winter", since it is still fall.) According to the wooly worms it will continue frigid until at least late January.

Longtime readers (if there are any still around) may remember my fascination with Juan Trippe's globe:

To review, Juan Trippe, when he was the head of Pan Am, had a very large antique globe in his office in the Chrysler Building. He used the globe and bits of string to plan out Pan Am's pioneering routes around the world.

That globe is now in the Smithsonian Institution, where I saw and reported on it in 2008. Close examination revealed it to be a "Malby's Terrestrial Globe", which was not terribly significant to me at the time, but probably should have been: 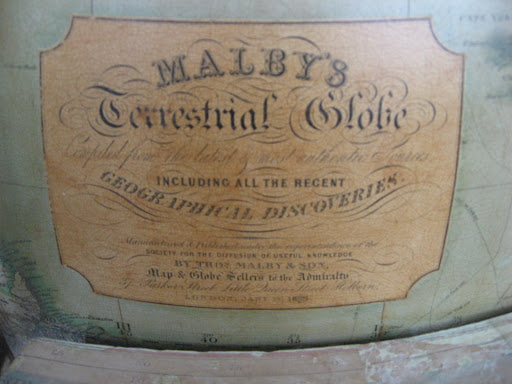 Thomas Malby was a globe and chart maker in London who first estabilished his business in 1810. In 1849, he re-issued the 36" 1825 Addison globe "for the Great Exhibition", which was held in 1851 (in partnership with the Society for the Diffusion of Useful Knowledge, or SDUK). Reportedly Malby sold these globes until 1862, after which they were sold by James Wyld, another famous 19th century London globe maker.

There are quite a few Malby globes to be found around the world, but the giant 36" models are very rare, and very valuable. According to the University of Utah, who have two of them, there are only eight left in the world (three in the US and three in the UK, in addition to the two at Utah, according to them). I'm not sure this is correct.

Yesterday I was at the Biltmore House in Asheville, North Carolina, and was very surprised to see a 36" Malby globe in the library there. Perhaps more amazingly, a 36" Malby globe was recently sold at auction in New York - for $103,700. Including the Juan Trippe globe, that's three right there. Here are two more - although they are listed as "by James Wyld", they date from 1860 and I believe Wyld globes were actually made by, and labeled, Malby in 1860.

So Juan Trippe's globe would appear to probably be dated 1854, which is when Malby's big globes were at their most popular. (Here's an advertisement for them from 1850.) While there are probably more than 8 of them still in existence, they are still incredibly rare and valuable.

Globes are not cheap under any hardly any circumstances. The closest modern analogue to the large Malby globe is the 32" Replogle Diplomat - which runs around $8000 new. Someday when I have $8k lying around I'm going to get one so I can play Juan Trippe at home...

And Malby's? They're still in business in London, now known as the London Name Plate Manufacturing Co., Ltd. They no longer make globes (as far as I can tell) but the company is run by the 7th generation of the Malby family. Cool... Now if we could just get them to make more 36" globes!
Posted by CW at 10:47 AM 8 comments: