Screw-ups are the mother of innovation

In recent history I've needed to carry around a lot of strange tools and hardware when I travel, because I've been doing a lot of hardware installations and maintenance. So not too long ago I decided to make a bag specifically designed to carry the junk that I need.

The first bag was large - fully loaded it tipped the scales at over 75 lbs, and carried a very large range of strange gizmos, to include two Linksys wireless routers and an Odyssey 12-volt battery, plus tools, test equipment, one or more laptops, extra monitors, keyboards, pointing devices, networking gear, food, water, survival items, and random other flotsam and jetsam.

Experience with the Large Bag led to my desire to create a smaller, more streamlined and tightly integrated bag, to carry only exactly what I needed, plus add some of the key functionality I had wanted in the Large Bag.

Most of this functionality related to power supplies. The Large Bag had the Odyssey battery (more or less the same cell found in F/A-18C Hornets for backup avionics power), two small inverters and a power strip/surge protector, where I could plug in the Linksys routers and laptop. I wanted to make this more efficient, eliminating the inverters, because mostly what I was doing was taking 12VDC, converting it into 120VAC (and heat), then converting it back to 12VDC.

So the New Bag, in addition to being smaller, was intended to have 12VDC integrated into the design. By not using the inverters (most of the time), I was able to get rid of the 20 lb Odyssey battery and replace it with two tiny 1.2AH 12 volt cells to power the routers, and a larger 6AH cell for the laptop and any other application that needed the inverter. To keep the batteries charged, I included a jack for a 12v "wall wart" power supply.

The final configuration for the New Bag included room for the various tools, parts, and equipment, in addition to two laptops, and various different power options, including a small solar panel to charge the batteries.

This is what it looks like, plugged in and operating: 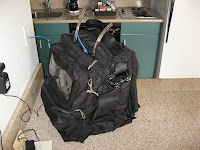 Notice the funny antennas... Those are the 6 db "homebrew" 802.11 "rubber duckies" I described in a previous post. Here's a better photo of the antennas themseves: 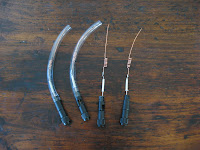 This poor photo shows the antennas with and without the 3/8" polyethylene tubing. The antennas themselves are made by soldering some plain copper wire to the elements of the stock Linksys parts.

So... despite all these cool gadgets in my custom-made backpack, I still left home without the power supply for my laptop. It is one of my pet peeves that laptops are power hungry. My Dell Latitude wants 90 watts, unlike the cool eeepc which only uses around 30. I had adapter plugs for the Dell, and an APC external laptop battery, just nothing that would make 90 watts at 19 volts.

I rooted around for a while, and this is what I came up with: 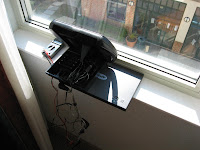 Its a 10-watt solar panel plugged into the APC external laptop battery. By charging the external battery from the solar panel, I could then transfer a little bit of charge to the laptop.

Did it work? Only a little bit. Charging all day in bright sunlight only got the APC battery up to about 25%. That 25% transferred to the laptop and got me about 40 minutes of use a low power settings. So the bottom line is I can run the laptop about 40 minutes per day on solar power alone - using this tiny solar panel.

What I want is one of those big roll-up or fold up solar panels that has a better chance of powering the laptop, but the biggest of those that I've found only makes about 40 watts. There are cool laptop cases with built-in solar panels that say they will charge a laptop, but it looks like they are going to take all day to get a good charge as well.

It's not like I am out in the boonies with no access to the grid... I'm staying in a Homewood Suites. 120VAC is plentiful. That got me thinking about where else I could harvest DC power in significant quantities. Most electronics are DC powered, even if you plug them into the wall, which means that there is a DC power supply somewhere inside. I doubt the Homewood Suites would appreciate it, however, if I took apart their TV.

What I really want is a small, light, hand-crank generator. I saw one at Micro Center, but it only produced 3 volts, for cell phones and the like.

The most obvious source of significant DC power is an automobile. I wonder if I could get the car to charge the laptop battery, without using an inverter... Stay tuned.
Posted by CW at 2:50 PM

Hey CW! Good to see you back.

Are you still planning to be in DC for the Trippe lecture?

I'm just back from the East with some interesting passengers hitching a ride in my insides.

Yes... I'll email you about it. I know the feeling of unwanted hitchikers in one's alimentary tract.